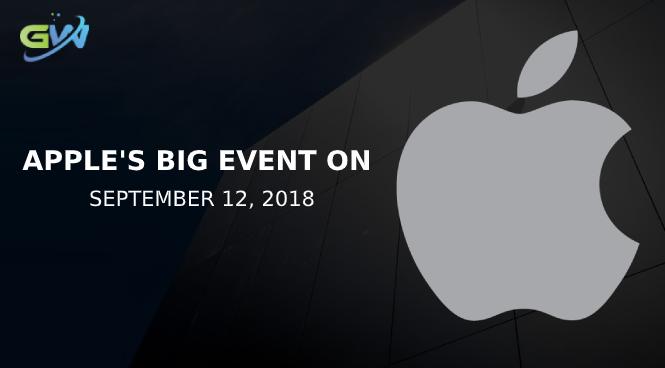 Once again September 12, 2018, is going to be an important day for the world Tech giant Apple, and you must be ready to have a date with Apple. Apple season is officially here, as a few days back company officially sent out invites for a gala event on Sept 12, at the Steve Jobs Theater in Cupertino, California. It is for the second time when the event is being planned at Apple Park Campus. This big event is definitely going to be a curtain raiser on  Apple’s all products which are due for refresh besides some significant announcement on new iPhones.

What are we going to see from the Apple Stable on Sept.12? As per the reports circulating in the media and in the web, we can see that Apple will debut three new iPhones that utilized the basic iPhone X design (with the big notched screen, no home button and Face identification ID), Apple Watch 4 and newer version of iPad Pros. Besides the above products, the Apple Mac line is also due for upward revision. Though there is no clarity of MacBook Air replacement, whether it will be revealed now on September 12, or any other later event.

Since there are so many products in the Apple stable, and nothing is so far confirmed by Apple, we give here under what is rumored now. However, Apple never comments on what is forthcoming from its stable in any announcements before the launch date.

Based on the recurring information from the sources, it appears that Apple will come of three new iPhones of which two will sport OLED screens, a technology which Apple brought with the iPhone X last year. Out of the two OLED models, one is probably going to be Plus version of iPhone X.

The new iPhone will come in size of 6.1 inches, a significant change from 5.8 inches of iPhone X. The third phone will have a 6.1-inch screen, but without OLED screen and a newer version of iPhone 8 released last year. The new phones with an OLED screen with 6.1 screens and with a smaller screen will have a name iPhone XS. A new gold-colored phone is also likely to be released, besides the usual Apple colors.

From the reports, it becomes clear that for the first time all the three Apple phones will feature large screens.

There is going to be multiple model launches for the Apple Watch and this is confirmed by documentary evidence. The watch will feature a new design and reported name:” Series 4.” One can buy Apple watch in multiple models with two sizes of its plus version with LTE.

From the supply chain, there are rumors that there is likely to be a reduction in size for both models of the iPad Pro.  But the reduction in size though not impossible is unlikely to happen, but there can be a reduction in the bezel area around the screen as in this mockup. It is likely that iPad Pro models will be getting a design similar to that of iPhone X and with Face ID, and this can be a possibility. Smart Connector moving to a new position is also a rumored with a report suggesting the iPad Pro losing its headphone jack. But since Apple is such a big concern, these rumors hold no water. The above possible changes can happen or not,  could only be known when the actual announcement to this regard is made.

This can be possible as Apple has explicitly revealed the details at this year WWDC event in June this year where details of major operating systems updates with timescale were revealed. The beta version was released for iOS12 in June, but on September 12, an event highly touted Group FaceTime won’t be included in iOS 12 version but will be done later on in the year.

Very little is there to suggest that there will be a release of new Macs. What is believed is that updates will turn the machine into more of a pro tool than a consumer one.

There are rumors about the release of a new low-cost MacBook, in place of aging MacBook Air. But since the company is good at creating the event that garners much attention for it, than to dilute its image, so there is a possibility of Mac Mini, releasing on October 18.

As announced by the Apple last year about the Air Power charging product releasing later on, and is still awaited. So this time Apple will make an announcement of what is being released, and Mac Pro will not be released as Apple has stated that it is planned to be released in 2019.

Apart from above-expected releases there are rumors that mini HomePod will also be released as Gather Round invitation graphic has an image of Apple Park, and it could be top of HomePod too.

For a complete information of what is going to be released by Apple on September 12, watch every event live as the entire event is going to be streamed online and also on Apple TV. Of course, we will also come up with the updates after the events on our blog also.