Android Q: What to expect 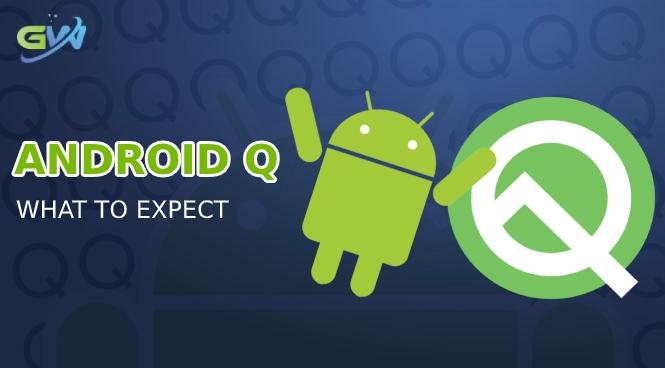 For last few days, there is a news in the tech world that Android Q is being launched. What is this Android Q? Android Q is the new operating system for mobile phones. This will be the 10th version of OS from Google. Though Android 9 Pie was announced on 6th August 2018, and the only handful of devices have received this OS till the end of last year. In fact, users are still waiting for an earlier version of OS Android Oreo to arrive, but now talks are there that the next version of OS is in pipeline.

Android Q since being the 10th version of OS will be called Android Q or Android10.

The Google developer conference Google I/O 2019 is going to take place from May 7 to May 9, 2019. As per the tradition, it is when Google introduces its upcoming Android release. But this time release of new OS developer preview is expected in the month of March 2019 and Public beta in May 2019, and stable release in the month of August 2019 as done with the earlier version of Android Pie. Last time the earlier release of new OS version was with respect to Android Jelly Bean.

Google has a tradition of naming the OS on sweet things. Android 9 is officially named as Android Pie. Many people are anxious to know what the Q stands for? It will only be known when Google releases its developer preview or beta version, and at present, it is anybody’s guess.

The features of Android Q that we believe or we expect to release with the launch of OS are listed below.

These features have been dug out by some keen minds from a member of XDA developers website who managed to get hands on an early leaked build of Android Q and installed it on the Google Pixel 3. Though these features are not final outcome as this is simply an early build and some more features can be added and some could be removed when the final version of Android Q is released.

Dark System UI: It is expected that System-Wide dark mode will be one of the features of the new OS.

System-wide dark mode is one of the features that are not yet official but Google has been indicating it since last few years. Last year Dark Mode has been introduced by Google in several of its apps and this time it is expected that dark mode is being brought on the system level itself.

There is a possibility that Android Q to bring new pre-installed fonts, icons shapes and accent colors which can be configured as per user choice. If this is made a reality then Google will be for the first time allow custom themes in its interface where the user has a choice to modify upon rooting.

Enhanced PiP Mode: The new feature of enhanced PiP mode in Android Q will be on the similar lines as what is seen in high-end Samsung smartphones popular among the people these days. With this feature, you can place the window of different apps on your phone screen, and all will run simultaneously, making the user of the phone more productive and increase the user satisfaction.

New Permissions setting: The new OS version Android Q is all set to bring changes to user permissions in the settings, which allows users to have more control over the apps. Users can restrict apps from using location in the background and many more.

Google intends to give users control over the app permissions which seems a great thing. There are changes in the design of permissions page, and confusing toggles for each app will be a thing of past as now apps will show up a simple allowed and denied list for each permission.

But for this, they would have to implement heavy interface changes for the support. Now Google is expected to provide native support to this feature in OS Android Q, which will make facial recognition use easier, and more handset makers will be able to support this feature in their future phones.

Desktop mode to take on Samsung DeX: There is a rumor that Google will add a new “Desktop mode” setting inside developer options when the new OS Android Q releases.

This Desktop mode feature will be similar to the feature of Samsung’s DeX feature, allowing users to transform their Android smart handset into a full-fledged Personal Computer (PC) by connecting it to a larger display screen through USB-C ports or HDMI ports.

Downgrading any app support: With this feature of Android Q, one will be able to downgrade any app. Till now this feature is only available with Google’s own apps.

There are many developers options added in leaked Android Q build; however, we are not likely to see all in the Android Q on official release later in 2019. The Android Q is likely to change the way we use a smartphone today.