Best Choice for your next App development- React Native or Flutter? 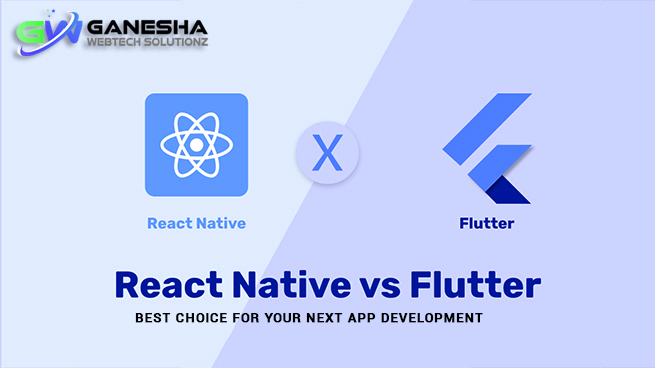 Smart Mobile Phone has brought a revolution in app development and now app development has become very sophisticated in nature with various tools, techniques, and frameworks emerging to assist the app development process. This has led to fierce competition among the app developers to develop the best cross-platform app for almost every field. More than 5.6 million mobile-specific apps are available for download via the market-places, Google’s Play Store, Microsoft’s store, and Apples App Store.

Lately Hybrid app development approach has gained popularity because it allows Mobile App Development Company to lunch an app on multiple platforms with the use of a single code base. There is a lot of talk among the developers about the best platform to develop a hybrid app for business between Flutter and React Native. I now in this blog give a comparison between React Native vs Flutter and try to find out which one is better for your next mobile app development.

Since Dart language is reactive, it helps in solving problems of responding to incoming asynchronous data. The ‘Hot Reload’ feature it supports help to accelerate mobile application development as an app can be rerun. Flutter current official supporter are Visual Studio Code, Android Studio and IntelliJ Idea.

React Native: It is one of the highly used languages for cross-platform mobile application development and is king of app development. It uses Java script data flow and built on the React library. Since Javascript data flow is unidirectional it makes the components stateless by managing all incoming data at one single place. The single code framework that javascript uses forms the base for iOS and Android applications. Instagram, Airbnb, and Facebook are the main users of this platform.

Moreover, the Javascript language is easy to learn and adapt and use of this language help React Native to score a top point in mobile application development. On the other hand, a lesser number of developer community adopt the Flutter language due to its complexities.

Flutter: Comparing purely on performance grounds Flutter has an edge over React Native on this front. Its edge over Reactive Native is because of Dart programming language and JavaScript bridge for native component connections.

On the other hand, React Native is no beginner framework and it is mostly preferred by the user community as its main architecture patterns being Flux.

However on the front of the tool both Flutter and React Native are equally capable with a wide range of IDEs both supports.

The Flutter framework being new is no less popular among the Top Mobile App Development Company and its use is increasing day by day. A lot of start-ups and reputed companies like Alibaba, Tencent, Google, and many others have adopted it. There is fierce competition between the two but till now React Native is a popular frame for mobile app development.

React Native, on the other hand, is backed by the huge community support of over 9000 users, 68 thousand stars on Github, 14.5  thousand users on subreddit.

To conclude React Native is more stable for mobile app development than the Flutter framework and enjoys a very large clientele. Flutter is a newcomer on the technological forefront enjoys less support with developers of the app. The security is a critical factor with hybrid applications as they can access all features from the device’s hardware layer such as camera, microphone and GPS and many others. Further, React Native apps are up-to-date in terms of platform changes whereas there is a sense of uncertainty with hybrid apps.

Considering the above points React Native is considered a more viable option and is widely used cross-platform app development.

Ganesha Webtech Solutionz is a leading Website and App development company USA call +1(408)-372-0967 engaged in providing Web development, App development solutions, and Digital Marketing solutions for websites for leading clients around the globe. Our developers of web and apps have sufficient experience in the field and are ready to take any challenge to meet the requirements of clients in delivering quick results. We can provide high- quality website and app development solutions with exceptionally responsive design to enable you to expand your online reach to your target audience and make your enterprise a successful business ventur