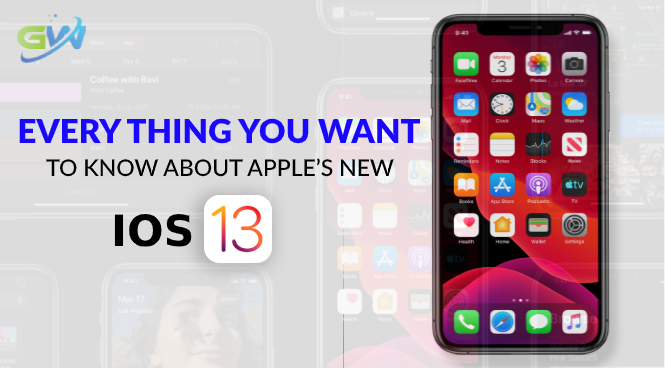 Apple’s next-generation iOS operating system, iOS-13 is expected to debut at the Worldwide Developer’s Conference (WWDC) this summer in the month of June 2019, but actually, it will drop in the month of September 2019, as was in the case with iOS-12. It will be the next version of Apple’s mobile operating system for iPhones and iPads. This operating system is already in the development stage at Apple’s headquarters in California.

Though very little is know about this new software at this point of time, but there are rumours that shed some light on some of the expected feature and changes. We can expect a redesigned Home Screen interface, Improvements to Photos, IPad specific cross-platform iOS and Mac apps and much more. Below are some of the Rumored Features of IOS-13.

CarPlay is Apple’s in-car system that allows one to hook his iPhone up-to-the infotainment centre. One can send messages, get the direction and also listen to music with it. This system was not given much-needed overhaul in iOS-12, but this time it looks that this will be upgraded to the next level.CarPlay is also expected to get a new Home Screen to match.

3.LIVE PHOTOS UPDATES: There’s a rumour floating around that the new version of iOS will extend the length of a video clip from a Live Photos double from three to six seconds

4.REDESIGNED HOME SCREEN: One major changes that iOS 13 is expected to bring on board is a completely redesigned home screen. Apple is working on it for the last many months. The new redesigned home screen could also feature in-app tabs to enhance users experience in multitasking. The new Home screen changes are for iPhone and the iPad, but what these changes will look like is not known till now.

5.REVAMPED FILE APP: It is rumoured that Apple is working on revamping File app feature for iPhone and iPad.

6.CROSS-PLATFORM APPS: People are waiting for a cross-platform app feature for a long time. So we can expect that Apple will finally introduce cross-platform support to iOS to aid app developers. With this feature developers can create apps which can be compatible with both iOS and macOS devices and users of both the platform can get a smooth experience.

7.SMART WiFi: There is a rumour from Various sources that Apple is going to introduce some smart WiFI features in iOS-13.

8.MAIL: According to MacRumors, a new Mail App feature will be added in iOS-13. The revamped Mail will allow you to mute incoming call notifications from specific email threads.

9.NEW EMOJI: The iOS-13 will not release new emoji but in an update later in 2019, Apple will be introducing new characters. The Unicode Consortium has finalized new characters to the emoji standard, and some of them include flamingo, otter, waffle, ice cube, white heart and many more.

10.AR ADOPTION: The ARKit platform of Apple introduced Augmented Reality (AR) for Apple mobile devices. According to reports, Apple is rumoured to adopt laser-powered, time of flight 3D cameras especially for iPhones a great step forward. It can scan areas up to 15 feet in range. Apple is also rumoured to adopt a rear triple camera design in the future iPhones. The larger of the new high-end iPhones will have three cameras on the back, and other I-Phones will be upgraded with this system in future.

No doubt that some of the main rumoured features of iOS-13 are discussed in short in this news item, there are many more to be revealed when the final release of iOS-13 takes place sometime in later part of this year. We are keeping our ears on the ground and will keep you informed in our future updates about the latest development in iOS-13, and also the detailed review of all features revealed in the final release.