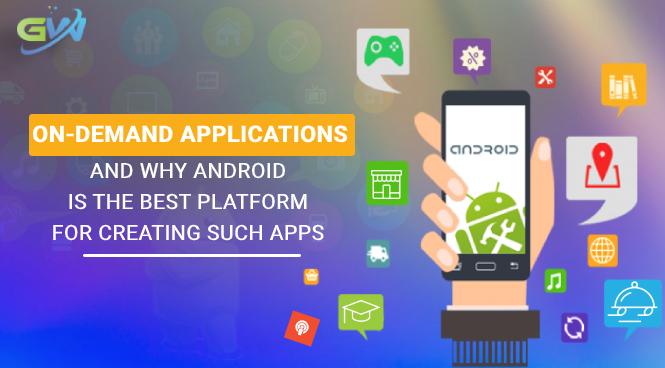 Yes, a taxi-app app such as Uber and a food-delivery app such as Zomato are on-demand applications that help customers demand services right from their smartphones.

For the uninitiated, on-demand applications wear the crown in the app development space. Given that customers could demand services while they are within the four walls of their house makes these apps a necessity for users these days.

That’s why it isn’t particularly surprising when you see the demand for on-demand apps accelerating. So, if your business is looking to propel their profit margins, this year, they should opt for on-demand applications.

Reasons behind the Rise in On-Demand Economy

Some of the noteworthy reasons for the rise in on-demand applications are as below:

People generally like services that are easily accessible, at the click of a mouse, right from their smartphones.

Users love it when the service you are seeking is available right at their doorstep.

The services offered by on-demand apps are generally economical compared to traditional services.

More than anything else, the on-demand app offers a straightforward mode of payment, which could be done within the app itself, that too within a few clicks.

First and foremost, an on-demand application should be user-friendly and should be backed by a rich UI design and quality features.

Plus, it should offer the following services:

WHY ANDROID Is THE BEST PLATFORM FOR ON-DEMAND APP DEVELOPMENT?

It goes without saying; Android has the largest market share as opposed to its counterparts like Apple and Windows. By the second quarter of 2017, Android leads the global market with an 87.9 percent market share. This is one big reason why business serving end users prefer to go with Android app development.

If you already developed an on-demand app, you will know it calls for lots of frequent upgradations. Why? Because the end-users are never satisfied. They keep demanding something or other. This is where Android apps help given that it offers a higher level of customization.

Because Android apps offer such flexibility, businesses can easily modify their apps and meet the demand of customers. This ultimately boosts the returns on investment. Not surprisingly, Android developers are showing more interest in the development of on-demand apps and working out various permutations and combinations with regards to the development of these apps.

For developing an on-demand mobile app, the app developers have to take into account GPS functionality, Maps, navigation and more. With these features, on-demand apps cannot function. When we talk of such features, it has been observed that Android has the edge over iOS.

You may have heard of Google Assistant, right? For the starters, it’s a personal assistant that works on voice assistance. The user simply needs to command, and the data are encrypted. All this gets automatically stored, which enable the assistant to offer personalization to the end user the next time.

Google assistant is a competitor to Apple’s Siri.

To cut to the chase, on-demand apps are the future as people prefer ordering things from the comfort of their homes. And given that Android boasts of features such as easy customization, voice assistance and more, it’s an ideal platform for developing on-demand apps.

Check out GoodFirms research on mobile app cost to get a rough estimate on on-demand apps.

For its cutting-edge, on-time delivery of apps, GoodFirms ranks Ganesha Webtech Solutionz as one of the Top On-demand Android application development Companies around the globe.

The company has put in place a seasoned team of Android App Developers who have put in years specializing in on-demand Android applications.

The company is one of the leading names in the Android App development space in India and has brought to fruition a good number of on-demand apps for clients spread across the globe.

The developers follow agile development which means the clients could have a working model while more features get added over a period of time. Further, the developers focus on coming up with an intuitive design and also known to address bugs in a fraction of time.

Their hybrid app developers craft solutions that run smoothly across all platforms including iOS, Android, Blackberry and Windows.

Likewise in iOS App Development, our developers create dynamic app pieces in keeping with the current and future technologies.

Last but not the least; the company is also big into web development. For this company leverages latest technologies such as Laravel, Ruby on Rails, CodeIgniter, Core PHP, React, Node JS, Vue JS, Angular and more to design customized web design that helps the clients propel their sales.

On-demand apps are gaining steam. So, if you want to take your business forward in 2019, try on-demand applications and get your developers on the on-demand mode.

Have you developed on-demand apps for your business? If yes, we’d like to know how it has helped your business grow.