There are various web development applications that are in use today like PHP, ASP.Net, J2EE, Ruby rails etc. 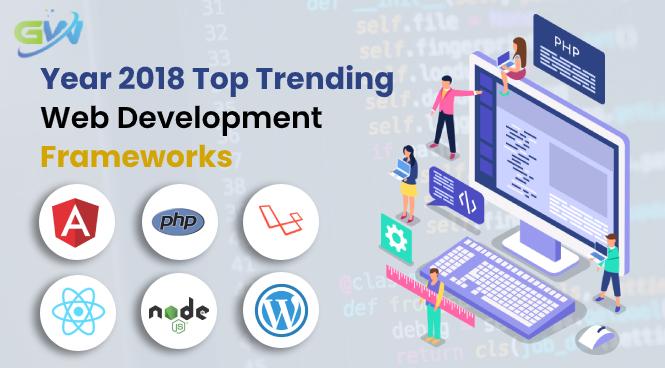 The growth of web development in the years gone by was very tremendous and this trend is likely to continue in year 2018 and the year to follow. More and more applications are moving to web and cloud today than before.

There are various web development applications that are in use today like PHP, ASP.Net, J2EE, Ruby rails etc but, PHP is a leading web development application with a largest share in overall web world followed by ASP.Net and others. Though every web application has great potential to grow in future but there are certain web applications which are going to be one of the leading trend setters in year 2018 and potential to grow in the years to follow.

Here are the few top trending web development frameworks which are likely to lead the tally in the year 2018.

ANGULAR: Originally developed and referred to as Angular JS.  ANGULAR is an open source front end web development framework for desk tops and mobiles and is based on Java Script and MVC.  A clear understanding of Java Scrip and MVC is required for Angular. It is a tool which includes a platform beyond doubt and helps in obtaining speed and providing a tool with unbelievable capabilities. The current version is Angular 5.0.

Angular has a wide use in large scale web applications and is currently a one of the most popular web development framework. Web developers working with Angular framework are earning a very handsome salary globally with a range of $78K to $118K annually.

REACT: This web development framework was developed in the 2013 by Facebook and is also maintained by it as an open source component based, learn light and write anywhere Java Script library for developing and building large data driven web applications.

React is not only an open source platform and being light weight but React has a good features speed and is very simple to develop and has a capability of achieving a higher scalability as per the needs. Current version of REACT is 16.2.0. Also like Angular REACT Developers and Full Stack Developers earn a handsome salary something from $ 85K to $110K.

Node: Node is an open source, cross platform based on Java script runtime and that runs JS on the server side and is capable of providing dynamic web pages that can be rendered by a browser.

Node is also known as Node. Js. , where a building of websites with a large scalable order Node Js is a popular choice. Js based frame work and is widely used currently. A Node developer is also in much demand in web based organisations and earns a handsome salary of $ 77K to $117K per year.

Progressive Web Apps:  Known as PWA or Progressive Web Apps, this platform concept was conceived and introduced by Google’s Chrome Browser team and has now become a leading mainstream technology in the hands web developers all over the world to build a fast, reliable and responsive web users interface and likely to be most aggressively followed trend in future also.

PWA does not ask for very cumbersome requirements. It requires three very simple things like HTTPS, a valid web manifest file and registered service worker containing a fetch event handler. These three things can be attached to website in not more that fifteen minutes and that too without breaking into the existing code in the website.

Large number of consumers are choosing and using progressive by using sites that upgrade to PWAS. Most of the browser vendors are throwing weight behind it as it offers them level playing field between native apps and the web. Over more than 2 billion consumers currently using mobile devices that supports PWA technologies. This number is growing daily. Microsoft is launching full technical support platform in PWA in the year 2018 and is being followed by Apple soon.